103 Most Famous Quotes By Ernest Hemingway 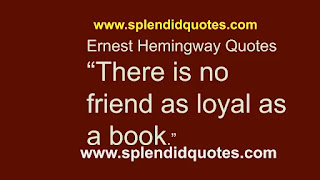 
“There is no friend as loyal as a book.”


“Courage is grace under pressure.”


“Happiness in intelligent people is the rarest thing I know.”


“We’re stronger in the places that we’ve been broken.”


“There is nothing to writing. All you do is sit down at a typewriter and bleed.”


“All you have to do is write one true sentence. Write the truest sentence that you know.”


“The best way to find out if you can trust somebody is to trust them.”


“Cowards die a thousand deaths, but the brave only die once.”


“Every man’s life ends the same way. It is only the details of how he lived and how he died that distinguish one man from another.”


“Write hard and clear about what hurts. ”


“Worry a little bit every day and in a lifetime you will lose a couple of years. If something is wrong, fix it if you can. But train yourself not to worry: Worry never fixes anything.”


“It is good to have an end to journey toward; but it is the journey that matters, in the end.”

“Show the readers everything, tell them nothing.”


“The most painful thing is losing yourself in the process of loving someone too much, and forgetting that you are special too.”


“We are all broken, that’s how the light gets in.”


“The world breaks everyone, and afterward, some are strong at the broken places.”


“In order to write about life first you must live it.”

“The hard part about writing a novel is finishing it.”


“The first and final thing you have to do in this world is to last it and not be smashed by it.”


“If you are lucky enough to have lived in Paris as a young man, then wherever you go for the rest of your life, it stays with you, for Paris is a moveable feast.”


“The rain will stop, the night will end, the hurt will fade. Hope is never so lost that it can’t be found.”


“Never delay kissing a pretty girl or opening a bottle of whiskey.”


“Go all the way with it. Do not back off. For once, go all the goddamn way with what matters.”


“I love sleep. My life has the tendency to fall apart when I’m awake, you know?”


“I like to listen. I have learned a great deal from listening carefully. Most people never listen.”


“The best people possess a feeling for beauty, the courage to take risks, the discipline to tell the truth, the capacity for sacrifice. Ironically, their virtues make them vulnerable; they are often wounded, sometimes destroyed.”


“We are all apprentices in a craft where no one ever becomes a master.”


“Live the full life of the mind, exhilarated by new ideas, intoxicated by the Romance of the unusual.”


“But man is not made for defeat. A man can be destroyed but not defeated.”


“When you stop doing things for fun you might as well be dead.”


“Night is always darker before the dawn and life is the same, the hard times will pass, every thing will get better and sun will shine brighter then ever.”


“You are so brave and quiet I forget you are suffering.”


“The world breaks everyone and afterward many are strong at the broken places. But those that will not break it kills. It kills the very good and the very gentle and the very brave impartially. If you are none of these you can be sure it will kill you too but there will be no special hurry.”


“Wine is the most civilized thing in the world.”


“The world is a fine place and worth the fighting for and I hate very much to leave it.”


“Every day is a new day. It is better to be lucky. But I would rather be exact. Then when luck comes you are ready.”


“I’m tired of everybody. Please forgive me.”


“Listen now. When people talk listen completely. Don’t be thinking what you’re going to say. Most people never listen. Nor do they observe.”


“Do not worry. You have always written before and you will write now.”


“The only kind of writing is rewriting.”


“To hell with them. Nothing hurts if you don’t let it.”


“Man is not made for defeat.”


“Write as well as you can and finish what you start.”


“The things of the night cannot be explained in the day, because they do not then exist.”


“There will always be people who say it does not exist because they cannot have it. But I tell you it is true and that you have it and that you are lucky even if you die tomorrow.”


“All thinking men are atheists.”


“No subject is terrible if the story is true, if the prose is clean and honest, and if it affirms courage and grace under pressure.”


"A cat has absolute emotional honesty: human beings, for one reason or another, may hide their feelings, but a cat does not."


“The only thing that can ruin a good day is people.”


“I drink to make other people more interesting.”


“An intelligent man is sometimes forced to be drunk to spend time with his fools.”


“Use short sentences. Use short first paragraphs. Use vigorous English. Be positive, not negative.”


“You’re not a moron. You’re only a case of arrested development.”


“Work every day. No matter what has happened the day or night before, get up and bite on the nail.”


“Never go on trips with anyone you do not love.”


“Humility is not disgraceful, and carries no loss of true pride.”


“Humility is not disgraceful, and carries no loss of true pride.”"There are only three sports: bullfighting, motor racing, and mountaineering; all the rest are merely games."


“Strong in all the Broken Places.”


“And you’ll always love me won’t you? Yes And the rain won’t make any difference? No.”


“London is a riddle. Paris is an explanation.”


“There is no hunting like the hunting of man, and those who have hunted armed men long enough and liked it, never care for anything else thereafter.”


“As you get older it is harder to have heroes, but it is sort of necessary.”


“I decided to stop drinking with creeps. I decided to drink only with friends. I’ve lost 30 pounds.”


“My writing is nothing, my boxing is everything.”


“A man does not exist until he is drunk.”


“Drinking wine was not a snobbism nor a sign of sophistication nor a cult; it was as natural as eating and to me as necessary...”


“Good writing is good conversation, only more so.”


“When writing a novel a writer should create living people; people not characters. A character is a caricature.”


“No animal has more liberty than the cat, but it buries the mess it makes. The cat is the best anarchist.”


“Fortunately I have never learned to take the good advice I give myself nor the counsel of my fears.”


“My only regret in life is that I did not drink more wine.”


“Write the story, take out all the good lines, and see if it still works.”


“I mistrust all frank and simple people, especially when their stories hold together.”


“By then I knew that everything good and bad left an emptiness when it stopped. But if it was bad, the emptiness filled up by itself. If it was good you could only fill it by finding something better.”


“I never knew of a Morning in Africa when I woke up and was not happy.”


“But life isn’t hard to manage when you’ve nothing to lose.”


“I’m not brave any more darling. I’m all broken. They’ve broken me.”

“It is by riding a bicycle that you learn the contours of a country best, since you have to sweat up the hills and coast down them.”

“When I saw my wife again standing by the tracks as the train came in by the piled logs at the station, I wished I had died before I had ever loved anyone but her.”

Top 112 Charlie Chaplin Quotes For You


“Everything that a painter did or that a writer wrote was a part of his training and preparation for what he was to do.”

Here on this site, you can read all types of quotes In English I hope you like “Ernest Hemingway Quotes” and share it with your friends. You may read John Muir Quotes , and Inspirational Quotes For Teachers. You can subscribe to our website to get updates about new Quotes.

Popular posts from this blog

By Silent Tears April 04, 2020
Famous 112 Charlie Chaplin Quotes For You “We think too much and feel too little.” “I always like walking in the rain, so no one can see me crying.” “Nothing is permanent in this wicked world, not even our troubles.” “You'll never find a rainbow if you're looking down.” “Imagination means nothing without doing.” “A day without laughter is a day wasted.” “To truly laugh, you must be able to take your pain, and play with it.” “Failure is unimportant. It takes courage to make a fool of yourself.” “Life is a tragedy when seen in close-up, but a comedy in long-shot.” “What do you want meaning for? Life is desire, not meaning.” “Perfect love is the most beautiful of all frustrations because it is more than one can express.” “Life is a beautiful magnificent thing, even to a jellyfish.” “You have to believe in yourself. That’s the secret.” “The saddest thing I can imagine is to get used to luxury.” “The mirror is my best friend because when I cry it never laughs.” “Your naked body sh
Post a Comment
Read more

By Silent Tears February 24, 2020
26 Famous Quotes By QUAID-E-AZAM MUHAMMAD ALI JINNAH QUOTES There are two powers in the world; one is the sword and the other is the pen. There is a great competition and rivalry between the two. There is a third power stronger than both, that is the women. My message to you all is of hope, courage and confidence. Let us mobilize all our resources in a systematic and organized way and tackle the grave issues that confront us with grim state. Pakistan is not going to be a theocratic divine mission. Determination and discipline worthy of a great nation. No struggle can ever succeed without women participating side by side with men. Failure is a word unknown to me. Expect the best, prepare for the worst. Pakistan not only means freedom and independence bit the Muslim Ideology which has to be preserved. With faith, discipline and selfless devotion. Inspirational Quotes By Muhammad Ali Jinnah on duty, there is nothing worthwhile that you cannot achieve. You a
Post a Comment
Read more

20 Quotes to Inspire Success in Your Life - Splendid Quotes

By Silent Tears October 07, 2021
20 Quotes to Inspire Success in Your Life 1) Action is the foundational key to all success. - Pablo Picasso 2) Always bear in mind that your own resolution to succeed is more important than any other. - Abraham Lincoln 3) Develop success from failures. Discouragement and failure are two of the surest stepping stones to success. - Dale Carnegie 4) Formal education will make you a living; self-education will make you a fortune. - Jim Rohn 5) Formula for success: rise early, work hard, strike oil. - J. Paul Getty 6) I've failed over and over and over again in my life and that is why I succeed. - Michael Jordan 7) The three great essentials to achieve anything worthwhile are, first, hard work; second, stick-to-itiveness; third, common sense. - Thomas A. Edison 8) Flaming enthusiasm, backed up by horse sense and persistence, is the quality that most frequently makes for success. - Dale Carnegie 9) Many of life's failures are people who did not realize how close they were to success
Post a Comment
Read more